For about a year and a half now, along with my friend and programmer Kaldonis, I’ve been working on a proof of concept demo for a game set in the world of my comics. It’s been a lot of work to squeeze around our respective paying jobs, but it’s also been a ton of fun to put together. Taking place in the same “Switchverse” as Reinbach’s ongoing comic series Switch and This Romantic World. Play as Isaac Marx as he is aided by a giant purple demon woman named Switch in his goal of fucking every girl in town.​ 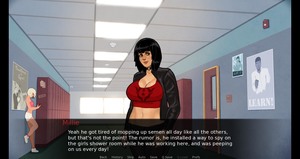 v0.9
This update is all about Bria! Her quest is now fully complete with a choice of two unique story paths available. You’ll need to do some digging with Millie to unlock her, but if you use the included save to skip ahead, you can just talk to Millie once and get started.
New since the test release last week are the background descriptions for the new environment, as well as a change to the janitor’s closet and and some extra dialog for completing Millie’s quest.
The big news is that this is the second to last story update for the game! With Bria, all nine possession candidates can be completed. If you clear all nine (or use the save and just clear Bria,) you’ll unlock a teaser for the upcoming finale!

Incest Patch
Unzip and copy and paste .rpy files into the game folder. Replace the files in the destination.